He and his colleague Vladimír Žák are among the most sought after designers and interior architects in the Czech Republic. They worked on the award-winning new offices for Avast Software, have received many awards, and since 2016 they have also led the studio D2 (Studio of Furniture and Interior Design) at the Academy of Arts, Architecture & Design in Prague.

What does Roman Vrtiška think about the future of the work environment and what should be the correct process for designing it? He took part in the first TechoCon Morning Meeting to present his ideas and opinions. "At the start forget about the space plan or the correct combination of furniture and concentrate on what is most important – people and their needs," he began.

Pan Hulot on a visit to Zappos

A figure dressed in a well-worn trench coat with hat, pipe and ubiquitous umbrella was created by French director Jacques Tati in the 1950s. Monsieur Hulot in his visually refined films found it difficult to function in the labyrinthine modern world of right angles, synthetic materials and technology.

In the masterpiece Playtime from 1967, Tati had his hero get lost among the futuristic buildings of glass and steel. On the way to an important meeting Monsieur Hulot loses his way in an office building full of similar offices and rooms. In one scene we see him confused in an environment which soon after became standard for large corporations. You must have come across the phrase "cubicle offices." Think of films such as All the President’s Men or Fight Club. 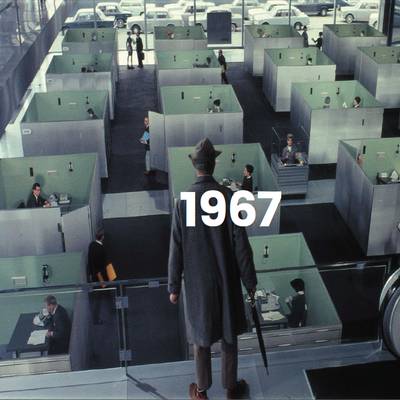 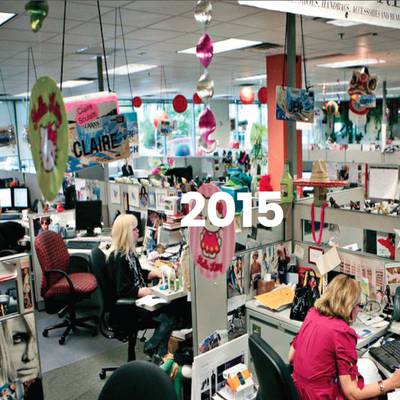 Luckily today things have moved on with respect to the work environment. For comparison, Roman Vrtiška offered a view of the offices of US company Zappos, which has preserved many things from this historical model, but at first sight we also find significant differences. Balloons, family photos, talismans – every employee has the opportunity to customise their workstation so that they feel comfortable.

Are you happy? Congratulations, you’ve got the job!

Whist the majority of companies recruit their employees depending on qualifications and experience, at Zappos the key factor during employee recruitment is “happiness”. Believe it or not, the first question that you would be asked as a job applicant would be: "How happy do you feel on a scale of 1 to 10?"

At Zappos they believe that happy people perform better and also pass on their contentment to customers. And their approach is not unique. Emphasis on care for employees is today a global trend across all fields. Some companies promoting inter-personal relationships at the workplace and away from it have even appointed happiness managers or company community administrators. In this Zappos has of course gone further than most companies, and the managers of this US firm themselves admit that due to efforts to support the company culture some places in their offices are not just lively but can actually be disruptive. 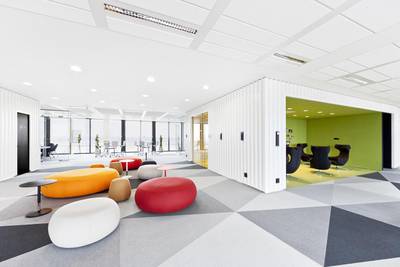 The Prague offices of Avast software demonstrate the approach of the duo Vrtiška and Žák to current workplace trends. The office areas are accompanied by a number of informal elements and activities, from the company restaurant to a cinema and workshop.

Start with acoustics and lighting

The example of Zappos can’t be followed by every company; company culture varies significantly, but there are several basic elements that need to be resolved in every work environment. "We always start any consideration about new office space by determining exactly how the space is to be used by the customer. We are interested in two main aspects more important than furniture. These are acoustics and lighting. When these are badly set out it represents a greater mental stress for people working in such environment. Your eyes soon become strained and it is difficult to maintain concentration," says Roman Vrtiška.

Office space is becoming much more open, which creates problems from the perspective of acoustics. A further obstacle is presented by, for example, large glass facades. Companies want to offer sufficient natural light, but because glass does not absorb sound it is necessary to take this factor into account when designing any office. 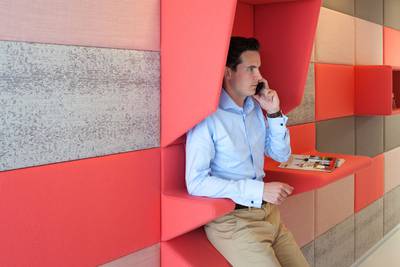 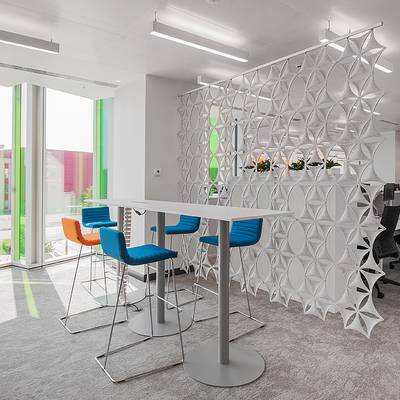 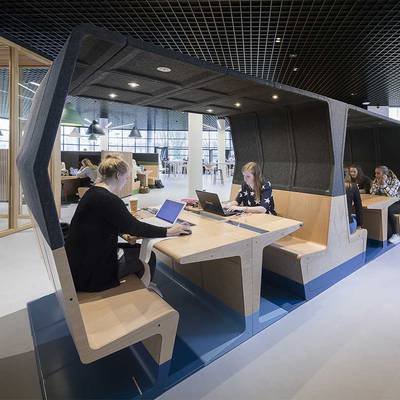 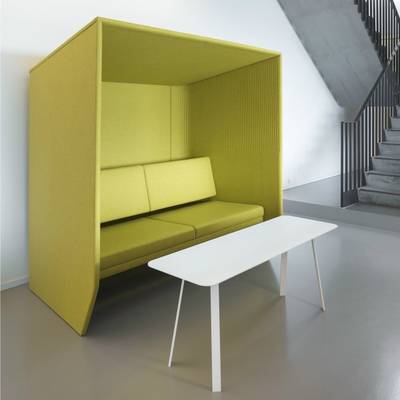 A current trend is microarchitecture

Today’s market already offers many options for resolving the problem of office acoustics. Manufacturers are striving to outdo each other in coming up with the most versatile and original solutions. The current trend is “microarchitecture”.

Furniture firms have in their portfolio, for example, acoustic collars for office chairs, telephone boxes, screens, false ceilings and wallpaper, which are today used not just as decoration, but as acoustically functional elements.

KIf we are looking for a model for the current boom in “soft” architecture we have to return to 1970 when Verner Panton created his visionary work titled Visiona 2, a futuristic psychedelic landscape of vibrant colours and organic forms. The Designer utilised his interest in new materials and experience of working with textiles to present his vision of life in the future. In doing this he breached all the traditional conceptions of space; he had created a complex organic shaped environment with different sections for well-being, communication and relaxation. He designed a whole range of items from furniture and textiles to lighting, wallpaper and rugs. In Visiona you can hear the singing of a nightingale, the buzzing of bees, the hooting of owls or the breaking of waves. Judge for yourself how many of his revolutionary ideas are today incorporated as a matter of course into the designs of many modern interior designers. 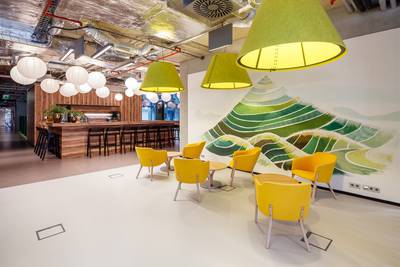 One of the many examples of how to resolve acoustics and lighting at the same time. Shade made from sound absorbing material. 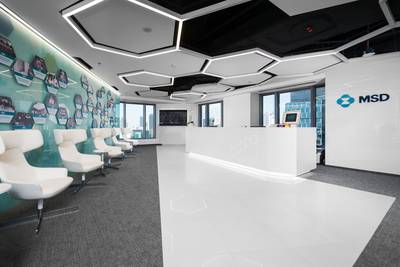 Solve two things at once, save space

Few of us are generally aware of the important evolutionary role played by our eyesight, and how much we are still forced to respond instinctively to certain stimuli. Have you noticed how difficult it is for people in restaurants to avert their eyes from a television that’s on? As Roman Vrtiška says: "Our brain is programmed. When I see that something is moving my brain interprets such stimulus as a threat. We respond in the same way to a strong light source. This fact is frequently taken advantage of. Light and light signals are used to deliberately attract attention."

When working at computers in offices our eyes are subject to considerable strain. There are already some producers of smartphones and computers that offer the option of automatic change of light tonality during the day on the basis of our physiological set up. They strive to reduce the negative influence of blue light, particularly in the evening.

We can also see a similar trend in today’s workplace environment. More and more companies are introducing new systems for automatic lighting that over the day changes the colour of the light.

A change of lighting also offers a great opportunity with respect to acoustics. Concealing light sources within large shades results in not just a distinctive design element, but also, if suitable material is used, perfect acoustic items. If you kill two birds with one stone you often save valuable space that in the future (with regard to office rental prices) would have cost a significant amount. 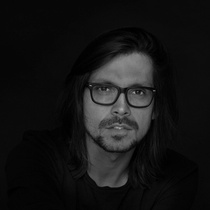 The combining of acoustics and lighting is an excellent new theme that gives rise to many creative solutions. It is definitely a subject for the future and we can expect similar solutions to crop up in new projects and that it will become a cost-effective solution for a wide range of customers. 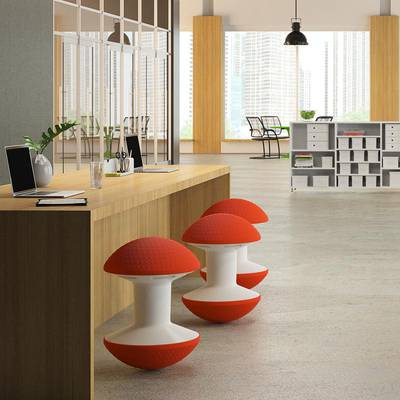 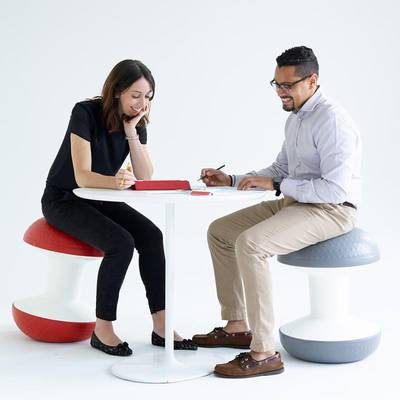 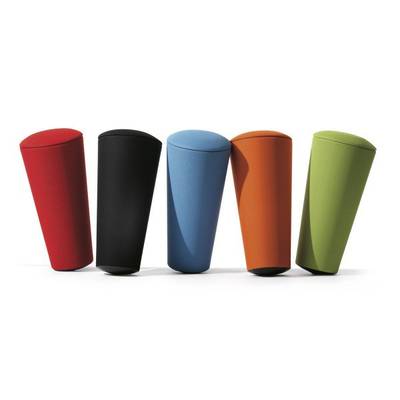 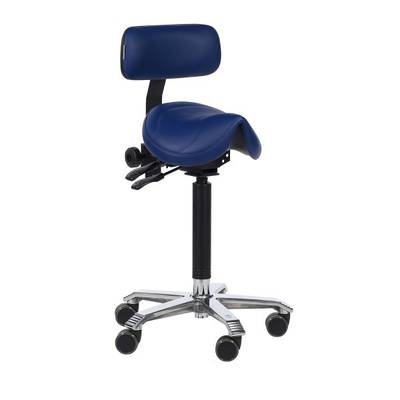 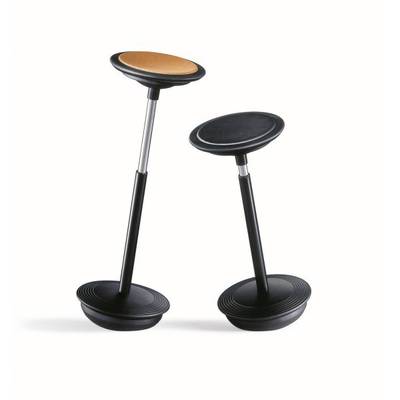 Italian designer Achille Castiglioni disliked the long phone calls of his employees so much that he decided to introduce his own solution. In the area where his colleagues went to make phone calls he placed a seating item of his own design. A bicycle saddle on a bar with a rounded base, which made it impossible to sit still.

In a modern office movement is no longer a punishment. On the contrary, designers strive to come up with new types of seating that enable as greater degree of movement as possible. We are already used to office chairs full of mechanisms, but a whole range of new solutions are being introduced suitable for quick meetings etc. and at other places than by a desk. Companies are well aware of not just the health benefits (for our backs continual movement is key), but also the fact that when we move we are able to concentrate for longer. Here too, something of our non-standard setup is reflected. 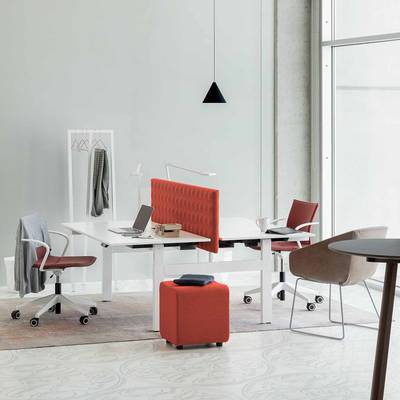 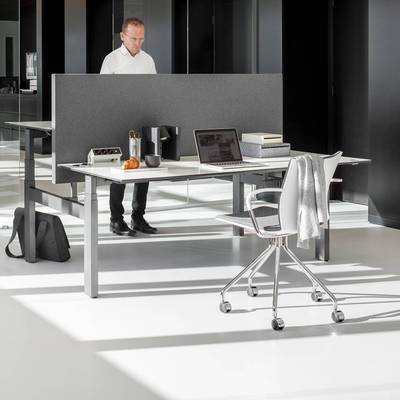 Few today have any doubts about the importance of ergonomically correct desks. The option of changing the desk height is starting to become standard. We are slowly becoming used to other functions, such as heated desktops, induction charging and communication technology.

In addition to ergonomics, designers, in particular with regard to the location of desks in open-plan offices, must strive to combine two contradictory requirements – the desire for private space and the requirement for greater communication between employees. Gaining favour are various types of hot-desk approaches with their many associated design challenges. There is a great opportunity, for example, in the use of storage solutions, acoustic partitions etc. Here too there is something to build on, and Roman Vrtiška presented as an example the cult system Level 34 from German designer Werner Aislinger.

When asked what form the office will take in twenty or thirty years, Roman Vrtiška shrugs his shoulders. He believes that the workplace environment will look completely different than today and that we have something to look forward to.

Roman Vrtiška and Vladimír Žák met whilst studying at the Academy of Arts, Architecture & Design in Prague, where they also started working together. Together they also studied at Alvar Aalto University in Helsinki, where their work was commended several times. After graduating from the Academy of Arts, Architecture & Design they formed part of the up and coming generation of Czech designers who have a wide range of interests and a professional approach to their work. Since then they have focused on projects in the area of architecture, product design and graphic design. Their clients include: Adidas, Belda Factory, Česká spořitelna, Diesel, DTZ, Egoé, Freshlabels, Heineken, Interspar, Jitona, Moravské sklárny Květná, KKCG, Indeco, Inno, mmcité, Ruukki, Scandium, Spokar, Tammi, Tereza Maxová, Teroforma, UP závody, Verreum, etc.

Since 2016 they have run the D2 studio (Studio of furniture and interior design) at the Academy of Arts, Architecture & Design in Prague.